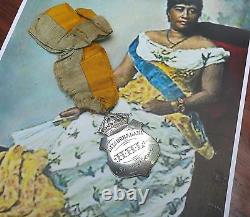 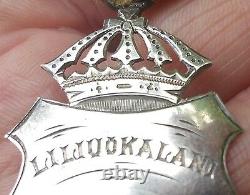 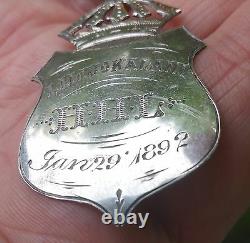 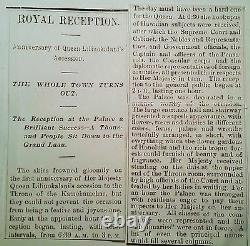 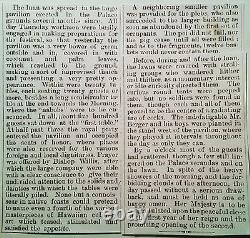 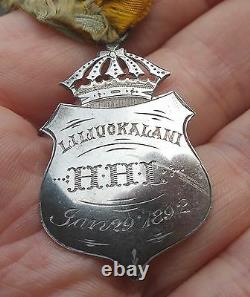 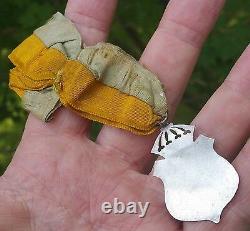 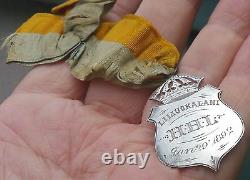 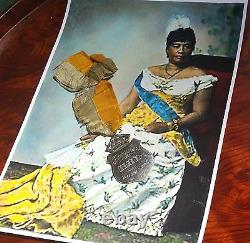 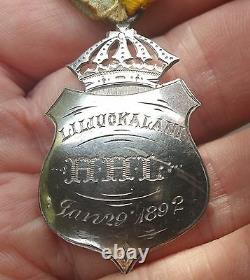 Worn in the throne room of Iolani Palace on January 29, 1892. A gift from, or worn by , Queen Liliuokalani on one of the most important days of her life: the day she stood on the dais at the Foot of Her Throne and received congratulatory dignitaries from around the World. The event marked the 1st anniversary of her peaceful & prosperous reign. HHL H er H ighness L iliuokalani.

Liliuokalani's royal color was yellow and the Kamehameha/Kalakaua crown was reserved for royalty. The use of the crown and her royal color suggest that the piece was crafted under Royal Warrant. This came from the Boston area of Londonderry (Nutfield) New Hampshire where Liliuokalani's mother-in-law was born (John Dominis' mother). We believe the two most logical ways it ended up in her in-laws' territory is: 1. Liliuokalani enclosed it in a letter she wrote to one of her East Coast in-laws (John Dominus had just passed away, August of 1891).

One of her in-laws received it in person when they traveled to Honolulu to attend the queen's one year anniversary. With 100% accuracy we can claim (as documented by the January 30, 1892 Honolulu newspaper article found in our series of photos above) SOMEONE most likely the queen! Wore this brooch in the throne room of Iolani Palace on January 29, 1892. This is as close as you're going to get to owning a piece of Queen Liliuokalani's jewelry! A five pound sterling silver " Bug Basket " from Buckingham Palace , the most-prized possession of the last reigning monarch of The Kingdom of Hawai'i , an artifact from The White House and Porcellian Club (the birthplace of Facebook), the first man to the moon's 1st appearance in Space and an 1885 New York City "Sitting Bull" Cigar Store Indian are but a few of our most interesting pieces.

This item is in the category "Collectibles\Cultures & Ethnicities\Hawaiian\Jewelry". The seller is "theurbanarcheologist" and is located in Tracyton, Washington.

This item can be shipped worldwide.